Risks with attaching verandahs or carports to your house

In recent years, the size of attached roofs has grown substantially and spans of six metres or more are now common.

As well as covering double car spaces under carports, they now cover very large outdoor entertaining and living areas. This increase in size can more than double the loads now being placed on fascias and eaves. Coupled with this are changes to the way roofs and eaves are framed for the house itself.

Prefabricated timber and steel roof trusses are frequently used for the roof framing of the house and fascias are often made of thin metal with limited ability to act as distributing beams. It should not be assumed that the existing timber or steel structures can support additional loads such as carports or verandahs. The attachment of a carport or verandah to an existing roof structure may void the structural warranty of the existing structure and may compromise the structural integrity of the existing structure.

Where a Class 10 building (such as a carport or verandah) is to be attached to any part of the roof framing of a building of another Class (such as a dwelling), the adequacy of the existing structure (roof framing, wall framing, tie-downs) to support the additional roof load width must be verified.

Things to consider when attaching to an existing roof Is the fascia capable of transferring the new loads to the existing roof framing? (see Figure 1). 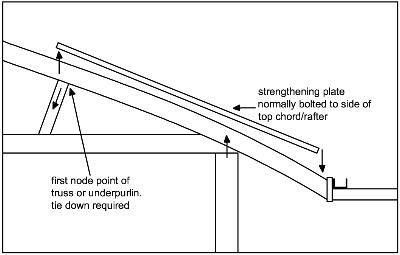 Does the roof framing need to be strengthened? The eaves are normally supported by cantilevering the rafter or top chord of a truss. Any strengthening should be carried back to at least the first underpurlin or to the first node point in a truss (see Figure 2). 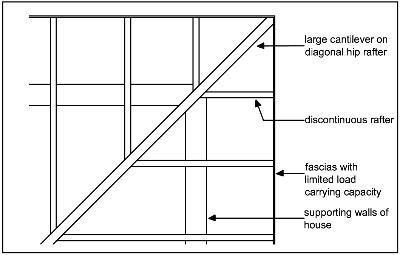 The weakest point of a hipped roof is at the corners. This is due to the shallow roof space, the number of discontinuous framing members and the larger than normal cantilever by the diagonal hip. Any additional loads in these areas need special consideration to make sure there is a clearly defined load path transferring the loads from the new roof to the supporting walls of the house (see Figure 3). The new roof will also generate significant uplift forces from wind loads. As well as making sure that the weight of the new roof and any live loads are transferred to the supporting walls, reverse loads for wind uplift also need to be transferred and adequately tied down. Fortunately there are products on the market now that can be retro-fitted into an existing wall in order to develop the required tie-down (see Figure 4).